Re-Exploring Seattle: Life outside of Downtown

Can I tell you a secret? I’ve been to Seattle a few times since I’ve lived in Vancouver and I’ve never really understood what all the fuss is about. It’s great for shopping, and I’m all about dinner at the Cheesecake Factory, but other than that it’s just a slightly uglier version of Vancouver, right? Well, yes and no. After talking to some friends who are significantly more enamoured with the city than me, I started to wonder whether I had it all wrong. I still don’t think Seattle will be winning any ‘most beautiful city’ awards, but now I’ve realized that’s not the point. It’s not supposed to be as pretty as Vancouver, because it’s not Vancouver. It’s the birthplace of grunge, a pioneer in performing arts, home to over 3,500 restaurants, and a mecca for craft beer and coffee. In other words, its hipster central. Although this made sense to me, I was confused as to how I hadn’t experienced any of this in my trips to downtown Seattle. The answer seemed to be to look outside of the tourist district, so the man and I headed down for a dog-free long weekend in search of the ‘real’ Seattle.

Even though we were pretty much boycotting Downtown when it came to exploring, we ended up staying at the Westin because it was central, had a pool (number 1 on the wish list for our dog-free weekend!) and we got a great deal on Priceline. When we checked in on Friday afternoon we were upgraded to the 42nd floor with great views of the city. We headed out pretty much straight away for stop number 1 on the hipster tour: Ballard. 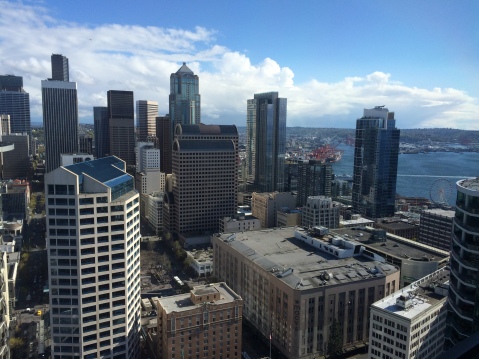 The beautiful view from the 42nd floor of the Westin 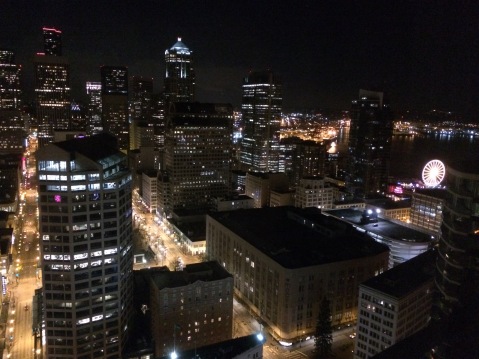 Ballard is a neighbourhood in north west Seattle which seems to be the equivalent to East Vancouver, in that its home to a TON of microbreweries and tap rooms. James was in charge of picking the route, and he chose three breweries which were within a few blocks of each other. We jumped in a cab (about $20) so we could both partake in some tasting, and enjoyed samples at Stoup Brewing, Reuben’s Brews and Populuxe Brewing. All of the breweries were small, basic and packed full of after-work drinkers. Stoup and Reuben’s were in large warehouse-type buildings with garage doors which were open in the warm weather. Populuxe was in a converted house, with a bar in what would be the living room and picnic tables in the garden. None of the breweries sold food, which mean that they were all pet-friendly and full of dogs. And I mean real dogs, not Yaletown dogs. They all had delicious looking food trucks parked outside which were very popular. 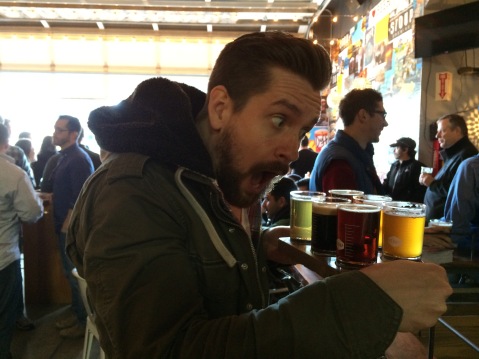 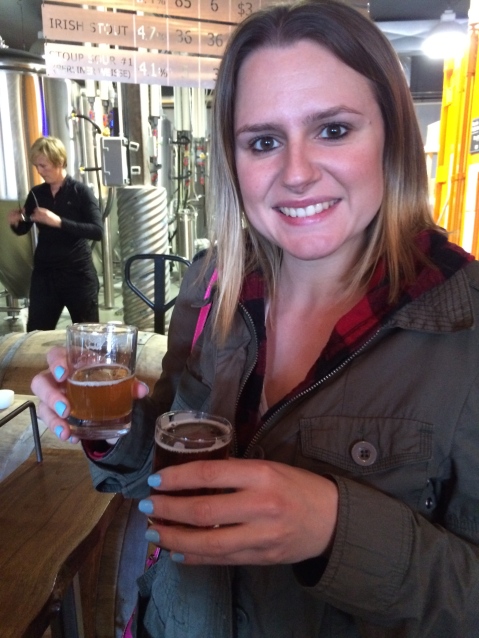 I stuck to my two little tasters! 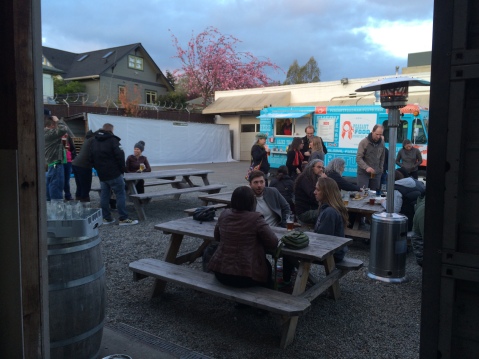 The (beer) garden at Populuxe

The best thing about the breweries was how laid back they were compared to Vancouver. There was no need to worry about finding a seat or waiting outside, drinking whilst standing was encouraged and made for a much more enjoyable atmosphere. James preferred Stoup and Populuxe to Reuben’s (the beers there were very, very strong), and when pushed said that Stoup was his favourite. After our evening of sampling we jumped in a cab back down to Capitol Hill and had a burger (and another flight of beer) at Six Arms, followed by dessert from (of course) Cheesecake Factory.