When I first decided to move to Canada, I did the obligatory google image search to see what might await me. You may have even done it yourself. If you haven’t, do it now. Once you scroll down past the maple leaves and country maps, the first picture of the Canadian landscape is a beautiful lake with stunning turquoise waters, flanked by a glistening white glacier. The picture you’re looking at is probably Lake Louise in Alberta, Canada’s most famous of the turquoise lakes. The unique colour of the water is caused by glacial erosion of bedrock which results in tiny particles of rock, known as rock flour. When rock flour runs down into a glacial lake, it turns the water that unbelievably vivid shade of turquoise; a far cry from the mostly murky waters of the United Kingdom.

The beautiful Lake Louise…where I haven’t been yet!

I haven’t made it to Lake Louise yet (though it’s been on ‘the list’ every year!), but I did round off the last long weekend of the summer with a day trip to Joffre Lakes Provincial Park, just East of Pemberton. It was a toss up between Joffre Lakes and Garibaldi Lake (just South of Whistler) and Joffre Lakes won due to it being one of the only dog-friendly provincial parks in the Whistler area (of course Dave hiked too). It was a three hour drive to Joffre Lakes and it started to rain as we pulled into the parking lot. We considered turning around and heading to the nearest coffee shop, but decided to push on and see how it went. I’m so glad we did. Lower Joffre Lake, the first of three, is easily accessible just a few minutes walk away from the car park. I couldn’t believe how little effort was required to see so much turquoise! Apparently, neither could one very brave camper who went for a swim in the mist. We decided against it (d’uh), and returned to the main trail. 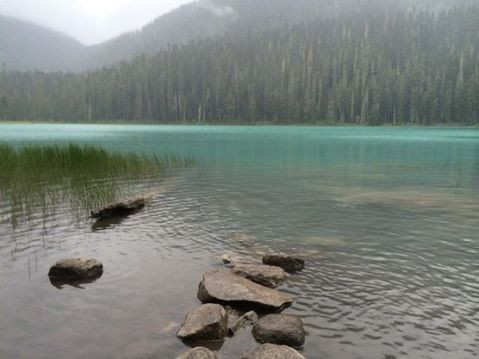 Our first views of turquoise through the mist of Lower Lake