I’ve lived in Canada for over 4 years now, and so far my only trip outside of BC was a short work visit to Edmonton last year (it wasn’t that bad, really). I have many, many places still to hit on my Canada bucket list and finally got the chance to check one of them off last week with another work trip, this time to Montreal! I flew out on a Sunday, had meetings all day Monday, Tuesday and Wednesday morning, and then had Wednesday afternoon through to Thursday afternoon to do some sightseeing before my evening flight home. I scoured the interweb for itineraries and walking tours and was so excited to see more than just the inside of the Best Western Hotel Europa and various meeting rooms. I ended up packing a LOT into what was basically just 24 hours, and even cracked a few French words here and there.

Vieux Montreal, or Old Montreal to us anglophones, is the historic part of the city, with some buildings dating back to French colonial rule in the 1700s. It’s a much smaller area than I was expecting and spans only a few blocks squared. It includes the Notre Dame Basilica (see below), the Old Port, the Place d’Armes and the 8-storey New York Life Building, Canada’s first ever skyscraper. The main street than runs through Old Montreal is Rue St. Paul, and it’s this street that is featured on a lot of Montreal postcards. I admit that I was expecting Old Montreal to be like the French Quarter in New Orleans, and it wasn’t quite like that. But it was still fun to be back in Historic Europe for a few hours, walking along narrow cobbled roads and among old stone buildings with their coloured flags (and icicles) on display. This is a great area for finding out more about Montreal’s history, picking up some souvenirs or grabbing some delicious food – I recommend Santos for sangria and tapas.

Looking back at Old Montreal from the Old Port 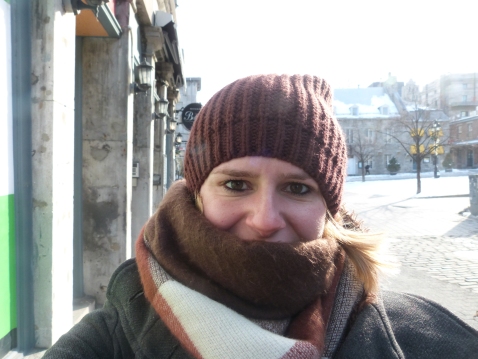 I was half way into the 20 minute walk from the hotel to Old Montreal when my phone suddenly died. I was surprised as it was at 100% battery when I left the hotel, until I remembered how often my phone used to suddenly turn off when I was snowboarding. I was wrapped up warm for my walk but obviously -10 was just too much for my iPhone to handle. Without access to my saved walking tours or google maps I was at a bit of a loss of where to go or what to do, so I headed for the only building that I knew I could find without directions – the Basilica. The entry fee was $5, which I knew was more than worth it as soon as I walked through the door. I was expecting to walk into just another cathedral (seen one, seen them all), but the Basilica was absolutely stunning. I couldn’t believe how beautiful and vibrant the colours were, especially the ceiling and the altar. I spent a good 20 minutes walking round and taking in all the details before settling into a pew to revive my phone. The warmth of the Basilica was just what it needed, and I had enough battery to make some notes on my paper tourist map. Sanctuary, indeed.

The Notre Dame Basilica from the Place D’Armes 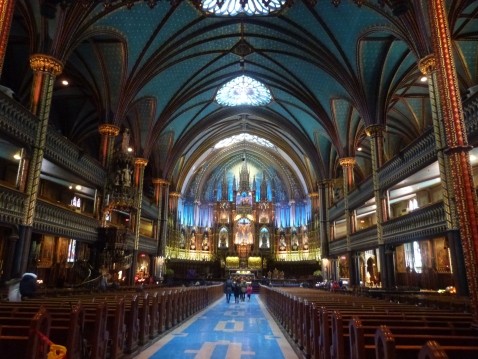 Inside the beautiful Basilica

Olive et Gourmando was top of my food list as I’d read about it on a number of travel blogs. It’s a cozy cafe on Rue St. Paul which has a great reputation and even better food. I settled into a high table and enjoyed the best soup I’ve ever tasted (homemade cauliflower and lentil) with the best croissant I’ve ever tasted (there was cheese involved) topped off with the best mocha I’ve ever tasted. It really was an amazing meal, and the atmosphere and service were also fantastic. I ended up going back to Olive et Gourmando on Thursday for another mocha and a sweet almond croissant, and again was not disappointed. 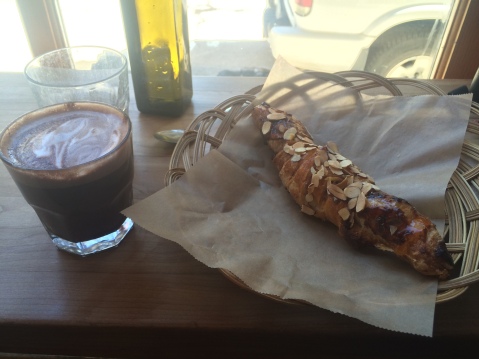 Second on my food list was some real Quebecoise poutine from the rumoured best in the city, La Banquise. I love love love poutine, especially from Megabite Pizza pm Granville Street at 3am after a night out. It was the French who first combined fries, cheese curds and gravy, so I was excited to taste the best in Montreal. After agonizing over the 30+ types of poutine, I decided that my taste test would be most effective if I kept it simple and went for La Classique. My plate of deliciousness arrived very quickly, and it was gooooood. Not infinitely better than Granville Street’s finest, but now I’ll feel better eating my Vancouver imitation knowing that I’ve sampled the original.

I’m a sucker for a good view and a challenge, so hiking from Downtown Montreal to the top of a mountain to look out over the city was a perfect way to spend a morning. It seems I walk much, much faster than the average TripAdvisor reviewer, and the climb up the stairs only took about 15 minutes (not quite the urban grouse grind I was expecting). The view really was stunning, and was made even better by the bluebird skies and fresh white snow. The mountain (hill) is also the site of Mount Royal Park which features cross-country and snowshoe trails, a tobogganing run and ice skating on the frozen Beaver Lake. 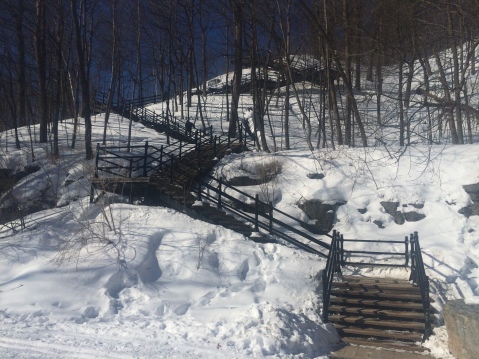 The steps leading up to the top of Mount Royal

Me at the lookout!

The view over Montreal

The final stop on Lizzie’s Custom Food Tour had to involve Montreal smoked meat. Schwartz’s Deli is known for serving the best, so I headed straight there from Mount Royal for an early lunch. After all I’d read online about Schwartz’s I was expecting a large, somewhat touristy restaurant. Instead I found a small, crowded diner which was just about as local as you could get (there were actual construction workers eating sandwiches on the diner bar). I ordered a #3 (sandwich, all the meat) with no mustard and it was both huge and delicious! The brisket was so flavourful, and the sandwich was just the right size to fill my post-hike appetite. The deli meat at Choices grocery store in Vancouver will never taste quite the same again. 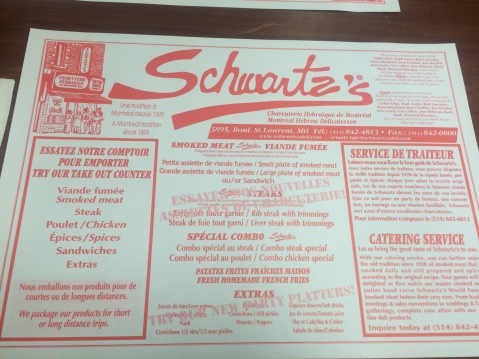 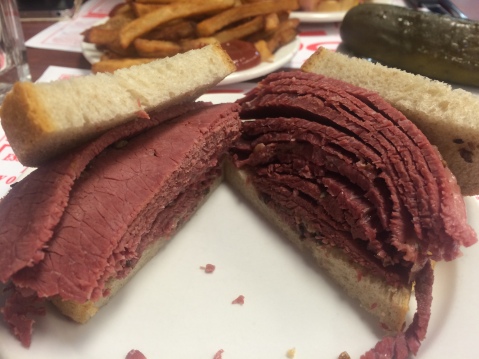 After a morning of walking in the snow, my final stop was the Underground City, also called the RESO. At first glance it just looks like a mall, but it’s actually the largest underground complex in the world. There are over 32km of tunnels which house over 1700 shops, 200 restaurants and 30 movie theatres, as well as halls, museums and hotels. You can get to the Underground City at any of the 120 entrances, and once down there you can walk miles across Downtown avoiding the cold and snow completely. This is definitely the way to walk to work for at least 4 months of the year.

Hiding from the cold in the Underground City

I'm originally from the UK and have been working and living the dream in Vancouver, BC, since January 2011. I am a firm believer in travel, good cheese, volunteering and community engagement.
View all posts by MarmitetoMaple »
« Previous post
Next post »